A Call to Prayer & Peacemaking from Bishop Carter 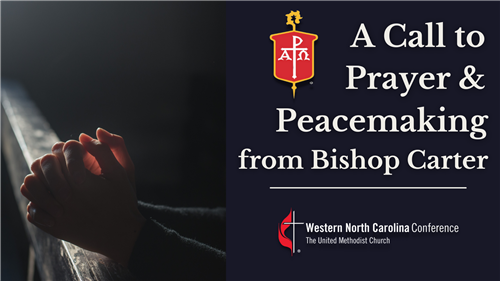 To the people of the United Methodist Church in the Florida and Western North Carolina Conferences:

I write today to call all of us to prayers for peace in the Ukraine and across Europe. I have written to my colleague, Eduard Khegay, who is the Bishop of United Methodists in Russia and the Ukraine, assuring him of our intercessions. Russians and Ukrainians there were nurtured in the same baptismal waters and are now brought into conflict with each other through an unjust war.  I have had the privilege of teaching in the United Methodist Seminary in Moscow and serving on their board, and know first hand about the courage and faithfulness of Christians in Eastern Europe.  I am also praying for wisdom, strength and diplomacy among leaders with the power to make decisions that lead to peace.  Our Social Principles remind us that war is “incompatible with the teachings and example of Christ” and we “oppose unilateral first/preemptive strike actions and strategies on the part of any government” (Discipline, 165).

I am also praying for the people of our own nation, and our own church.  In the face of the tragic reality of war, we have the opportunity to express faithful, bipartisan citizenship and mature peacemaking rooted in Christian discipleship (Matthew 5. 9).   We too have been nurtured in the same baptismal waters.  We too can be people of peace. This can begin with each of us, wherever we are.  Lord, in your mercy, hear our prayers.

In the name of the Prince of Peace, Jesus Christ.

And, from the Lutheran World Federation (LWF), the World Communion of Reformed Churches (WCRC), the Conference of European Churches (CEC), and the World Methodist Council (WMC): 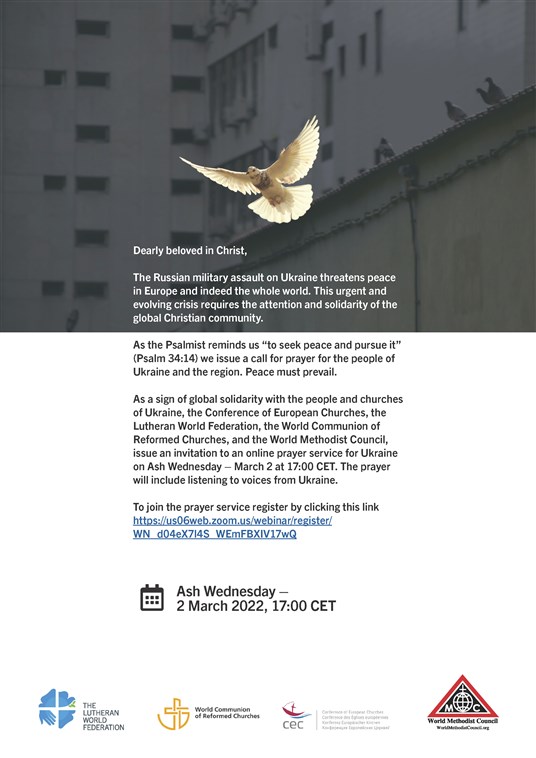 Four Christian World Communions are strongly condemning the advance of the Russian military into Ukraine and the assault that began on the night of 24 February 2022. They call for Russian troops to be brought back to Russia and an immediate end to the conflict. “Peace must prevail,” they insist.

The Lutheran World Federation (LWF), the World Communion of Reformed Churches (WCRC), the Conference of European Churches (CEC), and the World Methodist Council (WMC) are calling for prayers of peace for the people of Ukraine and the region.

They have issued an invitation to an online prayer service on Ash Wednesday, 2 March at 17.00 CET. The service will bring together Christians from Ukraine and other parts of the world, seeking peace and an end to the ongoing conflict. “Jesus calls us to be messengers of hope who work for peace. As Christian churches we, therefore, call for an immediate de-escalation of this conflict, so that the lives, human rights, and dignity of people in Ukraine are protected,” said LWF General Secretary Rev. Anne Burghardt. “This is a time for churches in Europe and globally to form a strong alliance of solidarity with people who fear the impact of war in Ukraine. This is a time to gather in prayer for people who possess the power to
make decisions that will save lives and make peace possible,” said CEC General Secretary Dr Jørgen Skov Sørensen.

“As the Scriptures encourage us to turn away from evil and do good, to seek peace and pursue it (1 Peter 3:11), we consider such an unprovoked attack as evil, and strive to do all we can to stand against it—while also preparing to assist those impacted by it,” said the WCRC Collegial General Secretariat (composed of Hanns Lessing, Philip Peacock, and Phil Tanis). “Despite what is happening in Ukraine, I still believe that the international community can make a difference as we collectively work for peace in the region,” said Bishop Ivan Abrahams, General Secretary of the World Methodist Council.

In the call to prayer for the people of Ukraine and the region, the four Christian communions note the military assault threatens the lives of Ukrainians, as well as peace throughout Europe and beyond. “The crisis is urgent and requires the attention and solidarity of the global Christian community.”

The LWF brings together 148 Lutheran churches representing over 77 million Christians across the globe. The WCRC is comprised of 100 million Christians in Congregational, Presbyterian, Reformed, United, Uniting and Waldensian churches. The Conference of European Churches is a fellowship of 114 churches from Orthodox, Protestant and Anglican traditions from cross Europe. The WMC encompasses 80-member Methodist, Wesleyan, and uniting churches on six continents with more than 80 million members.