The Judgment Seat: Then, Now, and Later 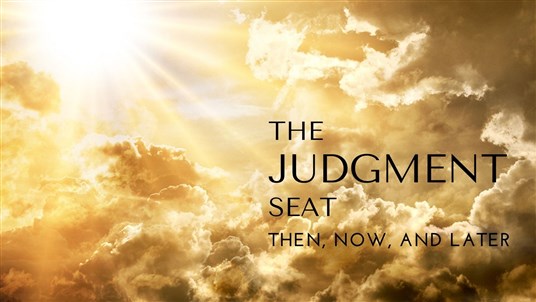 The Judgment Seat: Then, Now, and Later

“For all of us must appear before the judgment seat of Christ,
so that each may receive recompense for what has been done in the body, whether good or evil.”  ~ 2 Corinthians 5:10 (NRSV)

Next week, if we read our Gospels day by day, we will once again witness Jesus before the judgment seat of Pontius Pilate. By virtue of his position in the Roman government, Pilate was authorized to sit in this powerful, symbolic chair. I sense, though, that by the time Jesus entered Jerusalem for Passover, he had already been judged multiple times by many people. Being judged was old hat for Jesus by the time he met Pilate in Jerusalem.

Jesus had been deserted by his closest friends, ruled upon by local rabbis in the Galilee and all the chief priests and the elders in Jerusalem, and charged on multiple counts of radical free-wheeling theology. One might say that Jesus was judged early and often by both private and public sectors. He was judged by his religion as well by his state. From there, as we recite in the Apostles’ Creed, “he suffered under Pontius Pilate, was crucified, dead, and buried.”

It strikes me this Lenten season that Jesus experienced both judgment and suffering long before meeting Pilate, long before flogging, long before the cross. People began judging him before his birth, into his infancy, and right through childhood. People judged him at the Jordan, and throughout the Galilee, in Samaria, and back to Jerusalem. The Gospels are chock full of humans judging Jesus.

Pilate, ironically, offers us a powerfully humbling lesson. He who had the “authority” to judge Jesus cowers under the actual task. His own wife implores him to “have nothing to do with that innocent man.” (Matthew 27:19) Deep in his heart, Pilate and his wife may have both been convicted that the judgment seat truly belongs to no human being. Pilate won’t go down in history as a sympathetic figure, but at least he was learning as he went.

As Pilate discovered, judging Jesus is tedious work; people continue to do it, even today. Jesus is still being judged against the laws of the Old Testament; he is still being judged by those inside and outside the church. We continue conversations, even within our own denomination, about the limits that should (or should not be) be exerted upon his grace, his forgiveness, and his promises. Some have slipped intentionally, and others unwittingly, into the judgment seat.

None of us ever set out to judge. We especially didn’t set out to judge Jesus. We didn’t begin there. We began by judging others. Jesus knew our human tendency to do this and addressed it in the Gospels, every time he was asked:

Jesus not only condemns judging others and promotes forgiveness; he even incentivizes it by reminding us that goodwill and forgiveness will come back to us in due time. He uses an example from the marketplace. (Wouldn’t you rather have a full bag of flour or wheat than one that is partially full of air?) Our own fairness to others will indeed be rewarded. Casting judgment and withholding forgiveness will exponentially damage us in this life, as well.

As the early church slipped into the judgment seat once Pilate abandoned it, Paul continued to bring home a theology of forgiveness in the New Testament, authoring what has long since become orthodox Christian doctrine:

History and church hierarchy later took the seat, and various sects and factions have competed for it. Various factions still vie for recognition as holiest and most strict. Some treat the judgment seat as a prize to be gained.

After two millennia and generations of harm, the resounding biblical word from Jesus is a word against judgment. Our theological tradition states that it is Jesus and Jesus alone who will sit alone on the judgment seat of all humanity.   It is not a judgment loveseat. It is not a judgment sofa. It’s a chair that seats the one and only Jesus Christ. He who has walked our path as one of us, he who has seen us at our best and worst, is the only one allowed in the judgment seat. It is he and only he who “shall come to judge the quick and the dead.”

We will all come before the judgment seat of Christ our Lord. This Lenten season I have been giving some extra thought to this, as I have been asked along with you to “repent and believe the gospel.” (As opposed to “stay stubborn and believe my own opinions.”) As a “J” on the Myers-Briggs Personality Type Inventory, judging is simply one of the ways I orient myself to the outside world. I am structured and fairly unadaptable. My judgment tendencies are strong. If I’ve met you, I’ve probably formed some opinion about you. I’m confessing. I’ll crawl into the judgment seat in a heartbeat, and it is only my love for and submission to Jesus Christ that beckons me back to my rightful place, which is on my knees at his feet.

For now, Jesus is fairly patient with me. After all, Jesus knows that God is not finished with me. But let us remember, now is now. And eternity is eternity. The judgment seat once belonged to Pontius Pilate. Now and again we sinfully assume it. In eternity, it will always belong to Jesus Christ. And he will have questions.

As you watch for Jesus, and with Jesus, in the week to come, slip off the judgment seat. It’s Pilate’s turn next week. And from then on, and into eternity, the seat belongs to Jesus. As a very faithful and very orthodox seminary professor once reminded me, and as the scriptures confirm, Jesus will do the right thing. You can leave that to him. Your witness to the world, however, is up to you.

Wishing You the Holiest of Weeks,