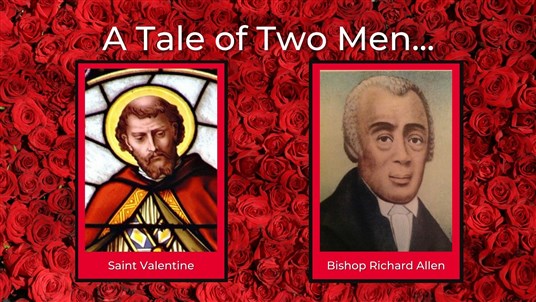 This is the tale of two men, born centuries apart, but who shared a mighty faith and, oddly enough, a date, February 14.

One died on that date and the other was born. But it’s their hearts that make them true brothers. 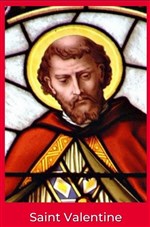 Valentine was a Roman priest who was imprisoned for ministering to Christians persecuted under the Roman Empire in the third century.  Emperor Claudius II decided that single men made better soldiers than those married and with families, so therefore he outlawed marriage for young men. Valentine, passionate about the injustice of that decree, defied Claudius and continued to perform marriages for young lovers in secret and was consequentially arrested.  According to tradition, while imprisoned, Valentine befriended a jailor whose daughter was blind. The jailor entreated Valentine to examine his daughter in hopes that Valentine might restore her sight. Through a miracle, or medicine, depending on the tradition you read, her sight was restored!  The jailer and his family were converted to Christianity because of Valentine’s love and faith that he put into action, undeterred by man’s law. 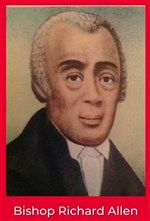 Richard Allen was born on February 14, 1760 in Philadelphia as a slave to Benjamin Chew.   His family was sold to Farmer Stokley.  At 17 years old, Farmer Stokley allowed Richard to buy his freedom for 2,000 dollars. Also at this time, he became a Methodist convert. He taught himself how to read and write so he could fulfill his dream of becoming a preacher for the Methodist Church. At the age of 22, he was permitted to preach. Two years later in 1784 at the first general conference of the Methodist Episcopal Church at Baltimore, Allen was considered a highly gifted candidate for the new denomination’s ministry. In 1786 he joined St. George’s Methodist Episcopal Church in Philadelphia where he was occasionally asked to preach to the congregation and held prayer meetings for the black church members.

Unreasonable restrictions were continuously placed on the congregants within worship, so wretchedly dissatisfied, Allen withdrew in 1787 to help organize an independent Methodist church. Allen refused, however, to sever his ties to Methodism: “I feel thankful that ever I heard a Methodist preach.  We are beholden to the Methodists, under God, for the light of the Gospel we enjoy.” He also declined an offer to pastor a non-Methodist church stating, “I told them I could not accept their offer, as I was a Methodist…I informed them that I could not be anything else but a Methodist…” (The UM Way, Living Our Beliefs Kenneth L. Carder).  In 1787 he turned an old blacksmith shop into the first church for blacks in the United States. His followers were known as Allenites.

The tale of two men, different yet the same; strangers yet brothers. Remembrance of St. Valentine and Bishop Allen are reasons for sheer jubilee as we give thanks for their unwavering faith, strong determination, and loving obedience to God that spilled over unto us!   As we learn of their personal and public struggles as they lived their faith, their tales are a rally cry for us to maintain, sustain, and proclaim through our struggles.

After all, I can be nothing else but a disciple of Christ…and a mighty United  Methodist!